It was raining when we returned to Napoli from Pompeii.  I was tired from exploring what seemed like most of the 60+ acres.  And, I was more than happy to go to my small room at Hotel Toledo and relax.  I opened the curtains, sheers and large French windows, stretched out on the bed (which faces the window and vicolo) and started to look at my photographs from the day.  The woman across the vicolo came out onto her balcony, waved and started a conversation with me while I was on the bed.  Only in Napoli?!  It didn’t feel invasive.  It felt neighborly.  She knew she was talking with a straniera  (foreigner) and she was friendly anyway.

Then, I started thinking about the number of times I was, shall I say, less dressed, with only the sheers closed.  Maybe she knows me better than I thought…

My friend sent me a message from Perugia asking if we had eaten at Trattoria da Nennella, yet.  Well, no, we hadn’t.  According to Google Maps it was a stone’s throw from the hotel – 100 yards!  (OK, an Olympic stone thrower.)  He told me it was a wild and crazy place.  (Do visions of Steve Martin parade through your mind when you read that?)  Hmmm…is this the source of the noise we hear every late night and early morn?  Time to check it out.

There wasn’t a line when we arrived.  We were relieved because we were hungry!  We sat indoors – only a few other tables were occupied.  The waiter was a bit abrupt, but, I had been warned.

Our wine choices were red or white.  A bottle, with fancy plastic solo cups, was delivered to our table.  And, this was the menu.  Notice the prices in the top corners – 15 euros with antipasto and 12 euros without.

For our primo piatto, we had pasta e patate con provola – a traditional dish of pasta, potatoes and a regional cheese (a variation of provolone).  Imagine the creamiest homemade macaroni and cheese with potatoes.  Ultimate comfort food…  I was full after eating half a bowl.  But, oh no, we’re just getting started.  That’s the way in Italia! 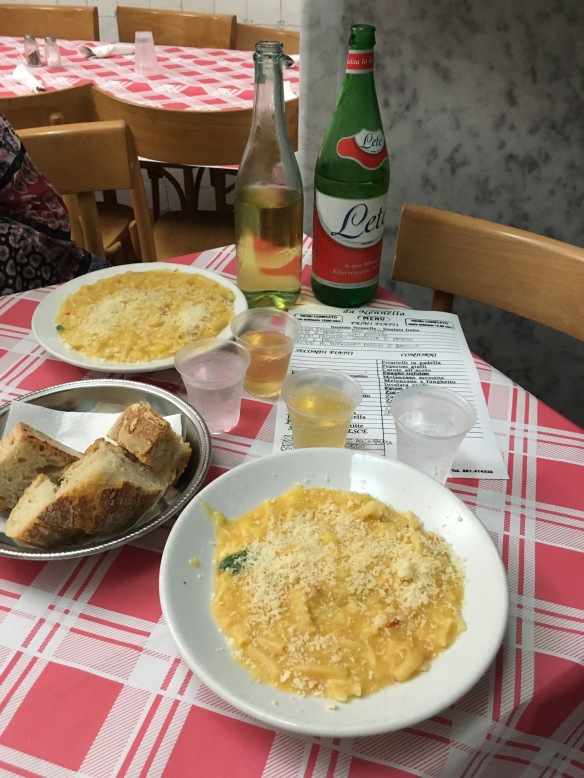 We had grilled fish for our secondo piatto and mixed veggies as a contorno (side dish).

We were serenaded – and, had more man-bun sightings.  Romantic novels will describe men unpinning their buns and shaking their locks loose.

My Facebook friends will know the story of this man.

I haven’t been to a market in Napoli, but, elsewhere in Italy I’ve had to don plastic gloves when I handled the produce.  In this restaurant, they passed around a bowl of fruit that everyone pawed.  We paused with the paws… 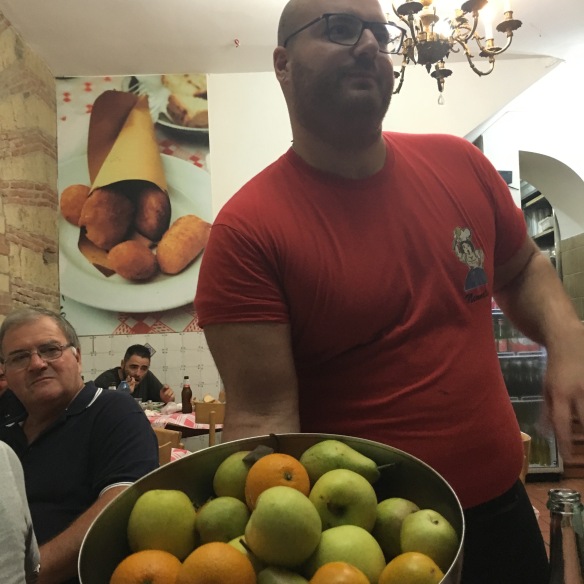 When we finished with our meal, they just wadded up the paper table cover –  bottles, partially filled glasses, and all, and threw it into the trash.

When we left there was a loud crowd waiting to enter.  So, to answer my question, YES, this is the source of noise at our hotel!  Go if you get a chance.  The food is delicious and inexpensive.  Just don’t expect smiles from the waiters – they’re tough nuts to crack.