Two years ago, I traveled to Italy and my first stop was Perugia.  Perugia is the capital city of the region of Umbria and the province of Perugia. I truly love this hill top city.  Perhaps that is because this is where I made my first friend in Italy.  I rented an airbnb room from Marcus.  We immediately ‘clicked’.  He is such a generous spirit.  His house was my house.  He shared stories, food, wine, music, friends and haunts with me.

Marcus and I have kept in touch the past two years.  I met Mimma, his friend, through Facebook.  I am really excited to meet her in person.

I was going to go to Spello, today, but, I decided to pass on by and proceed to Perugia (indirect with a change of trains in Foligno) – to meet my friends for an unknown agenda. 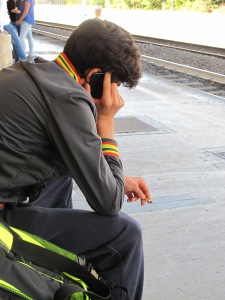 It’s my impression this is the typical teen in Italy – cell phone in one hand and a cigarette in the other.  (Foligno train stop)

After getting off the train (about 5 euros one way), I took the Mini Metro (1.5 euros for a 90-minute pass) to the city center (centro storico).  The Mini Metro is a way to move people from the lower parts to the higher parts of the city.  Marcus’ apartment is near the Cupa stop.

Moving up the hill in a Mini Metro car.

I tried to call Marcus, but, got no answer.  I walked to his apartment – and, felt a rush of contentment.  My big, gooey heart gushed.  He wasn’t home, either.  I walked UP via dei Priori toward Piazza IV Novembre with its famous Fontana Maggiore.

Born and raised in Colorado, I admit I was chilly.  I ducked into a ‘bar’ (with caffè, gelato, panini, vino, etc.).  I’ve been drinking the famous Sagrantino red wine from Montefalco.  I ordered a glass and watched the world go by. 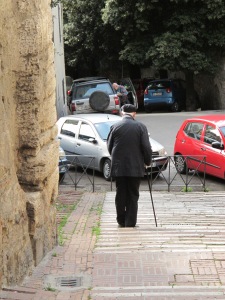 I eventually made my way back to Marcus’ apartment and see him through a window on the second floor – talking with a young man.  That young man is Martin, a 22 year old ‘couchsurfer’ from Brno in the Czech Republic (very fun company!).  It was so good to see Marcus’ friendly face again!  He had an Italian teen coming to his apartment for an English lesson so Martin and I made ourselves scarce.  I rested on Marcus’ bed – the bed I used when I stayed with him.  I wrapped up in a blanket and looked out my favorite window in Italy.  Not because it has the best view, but, because it has the best memories.  I would sit on this sill for hours – with coffee and/or a book.

I deem this MY windowsill.

The lesson ended and per our requests Marcus gave us tasks to help with the dinner.  He loves to cook.  And, it’s so much fun to cook with others than to cook alone.  I was put in charge of chopping onions – onions obtained at a recent onion festival.  Marcus thought I chopped too slowly.  I thought his knife was too dull.  Ha!  I could barely see through my watering eyes.  Martin told me that wetting the knife or chewing gum while chopping will lessen the tears.  I tried both.  Seemed to work for the next onion or two!

Enter Mimma!  We hugged and stared at each other!  Finalmente!  She is absolutely adorable.  Mimma is Italian.  Her English would put many Americans to shame.  Marcus told me she would correct my Italian if I made mistakes.  If?  Poor woman was busy all night teaching me.  It just comes so natural to her!

Dinner prep continued.  I didn’t chop the tomatoes fast enough, either.  Still, the knife was too dull!  I cubed the potatoes too small.  But, I think I got the garlic, fennel and olives just right.  Marcus made the most delicious panelle – a Sicilian chickpea flour fritter (topped with rosemary) for starters.  Then, we had an onion frittata.  And, pasta with pomodori topped with shredded! ricotta.  I was stuffed.  But, we were not done!  There was a salad and fish with capers.  Oh, and baked pears!  And, flowing wine.  Did I mention the music?(Marcus is a serious music enthusiast.  Martin is a guitarist.  Was I in my element or what?) We started eating at 8:30 pm and we were still eating three hours later.  They just laughed at me.  We talked about everything under the sun – including politics and religion.  At one point in the evening, Marcus’ friend (I met him in 2013) popped in.  He was so animated about some recent developments in his life.  The American expression, “Tell us how you really feel!”  popped up. 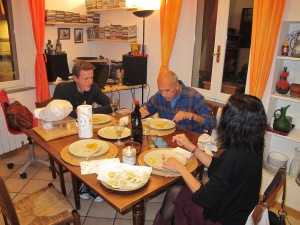 Martin offered this advice. If you are wondering if you have enough onions in your dish – add two more!

Marcus and Mimma had to teach early in the morning.  I missed the last train to Spoleto.  We all found places to crash for the night.  I never woke up once.

I miss them all already…